Why I wrote a guide to funeral planning for Queer people

This year Ceremony Matters National Conference for Funeral Celebrants is focused on Inclusion and Diversity. I’ve been working together with trans activist Ash Hayhurst, and he will be presenting at our celebrant conference in October about LBGTQIA+ experiences and perspectives on diversity. I am delighted that Ash has agreed to write a series of blog posts for Ceremony Matters, for LGBTQIA+ people and the funeral professionals who serve our communities – Emma

Why I wrote a guide to funeral planning for Queer people 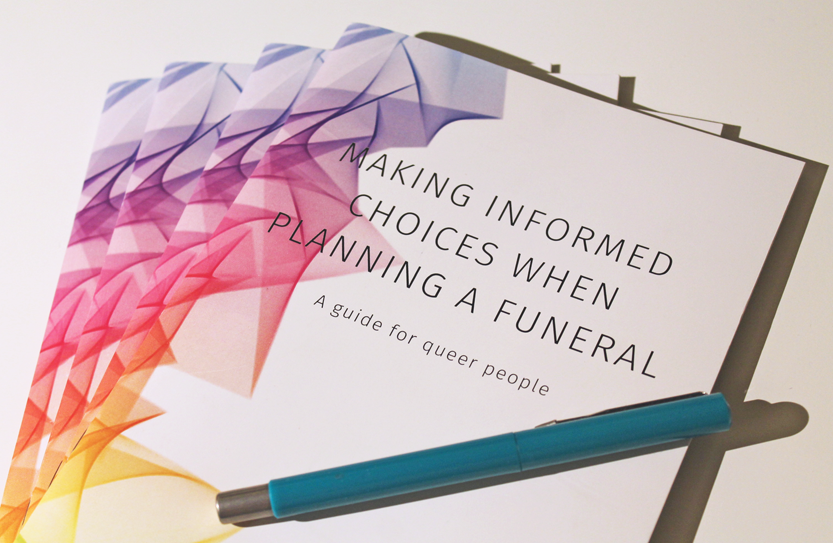 In June 2019 I wrote a booklet called ‘Making informed choices when planning a funeral – a guide for queer people’. It is a guide for any LGBTQIA+ people who have questions about how their wishes can be respected when they die. It explores the process of arranging a funeral, how to register a death, the importance of confidentiality, dressing the person who has died, and some suggestions on what to do to make sure your identity as an LGBTQIA+ person is validated after you die.

Many funeral arrangers do not receive formal training. I was lucky enough to receive a good training. However, I am that annoying person who raises their hand fifteen times to ask complicated questions and keep digging until I find an answer, and I definitely had a lot of questions that were specific to me and my queer friends who were curious about my new career.

With the help of my new friends and colleagues, I did some research and wrote a booklet which I hope helps with some of the worries LGBTQIA+ people might have about what happens after they die, and answers some of their questions. 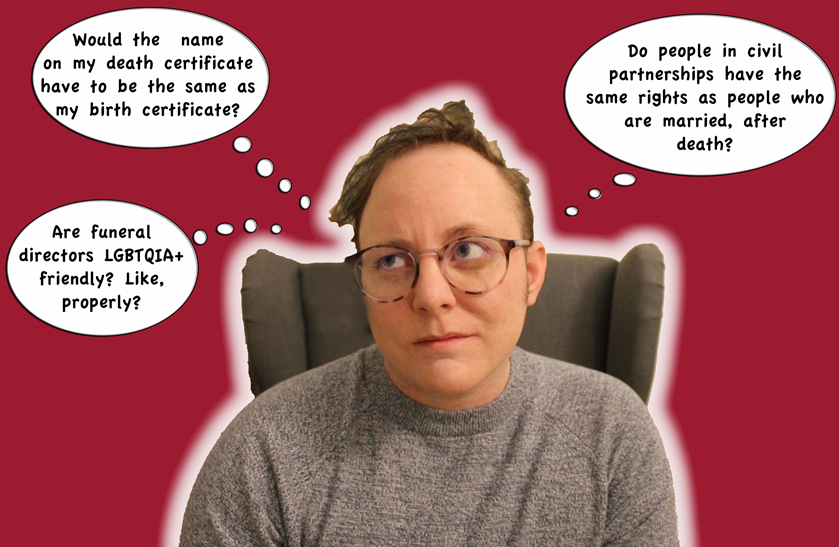 “Why are things different for LGBTQIA+ people?

We are all equal when we’re dead, and Funeral Directors treat people equally no matter what faith, race or sexuality they are, right?”

Well, I want you to have a look at some research…

In 2018 the charity Stonewall published a series of ‘LGBT In Britain’ reports. Stonewall commissioned YouGov to carry out a survey asking more than 5,000 LGBT people in Britain about their life.

Two findings continue strike me when I read these reports:

I’ll give you an example of how this has affected me. I’ve been extremely lucky with my medical care, but I have still had some pretty bad experiences as a trans man. The one that stands out for me is when I went for an outpatients procedure and was given a hospital bracelet with my birth name on. The appointment letter I received was appropriately addressed to “Mr Hayhurst”, and yet I was admitted to a female ward. My medical records had been updated two years previously, with a new NHS number and a male gender marker.

I was told by a nurse that I could not be admitted to a male ward as ‘the bracelet had already been printed’ and the doctor wouldn’t know where to come and find me to take me for the procedure. 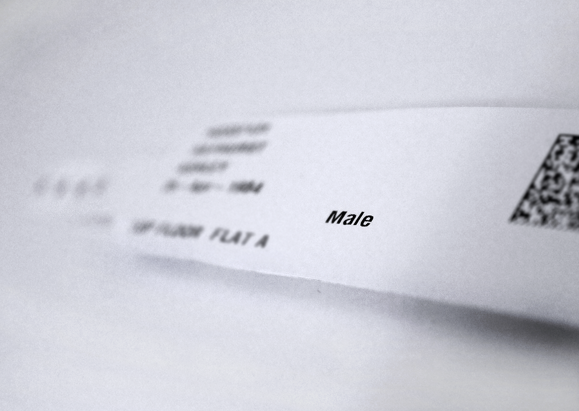 (This bracelet is from another visit, when the hospital got my gender right!)

“A quarter of trans people (25 per cent) contacting emergency services in the last year were discriminated against based on their gender identity, compared to three per cent of LGB people who aren’t trans. One in six Black, Asian and Minority Ethnic LGBT people  (16 per cent) were discriminated against compared to five per cent of white LGBT people.”

And that’s just one aspect of life that can be difficult. LGBTQIA+ people experience higher levels of anxiety and depression, are more likely to have experienced homelessness at some point in their lives, and only half of lesbian, gay, bi and trans people feel able to be open about their sexual orientation or gender identity to everyone in their family. One in seven trans people aren’t open about their gender identity to anyone in their family. 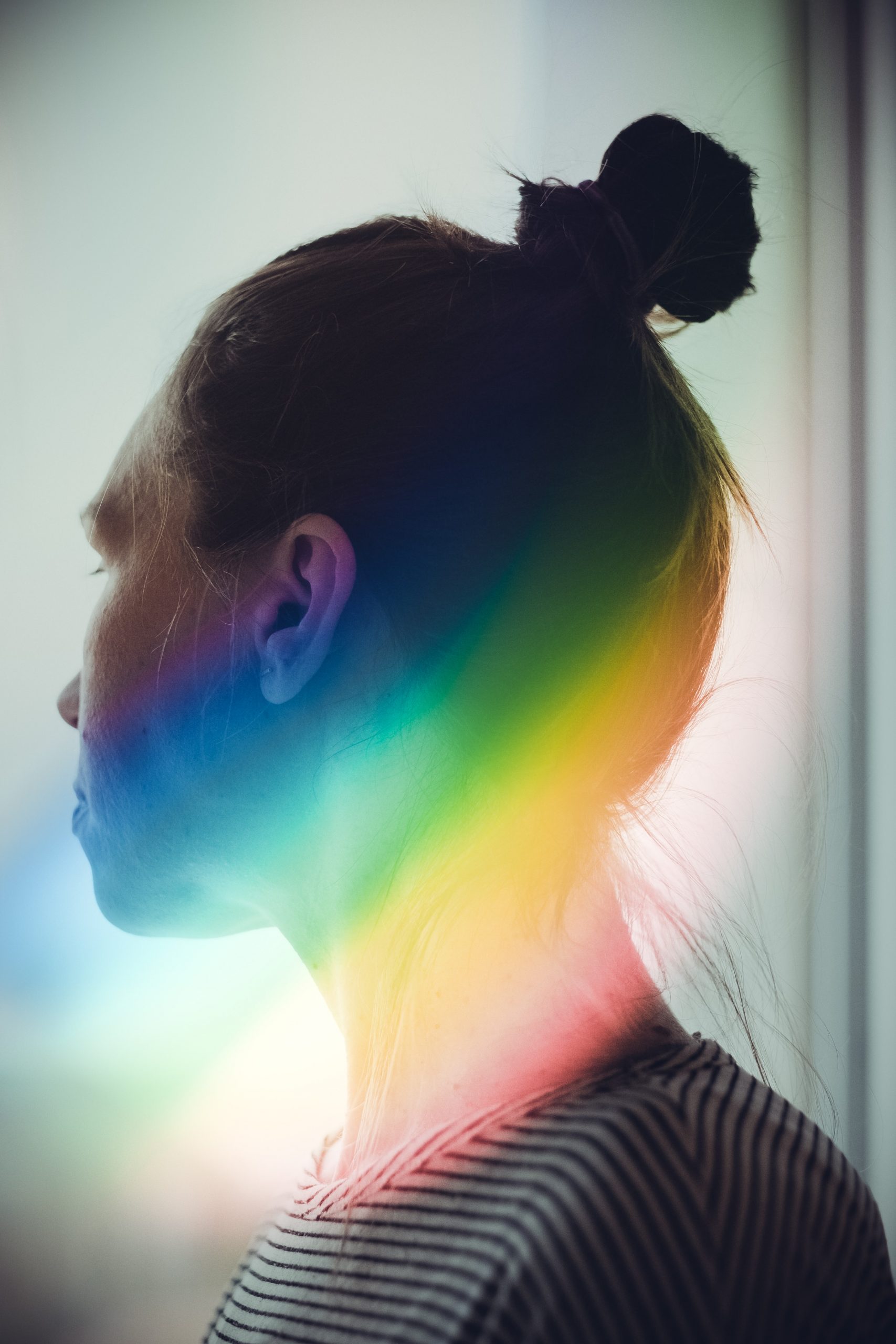 If I’m honest, I wanted my questions answered so that I could reassure myself as well as the queer community.

I wanted to know that my friends who are in civil partnerships have the same spousal rights as people who are married. I wanted to know if funeral directors, faith ministers and celebrants would keep information about someone’s LGBTQIA+ status confidential.

And above all, I wanted to know if the equalities act still applies to people who have died.

It turns out that the equalities act does not apply to people who have died, and that once you are dead, you have no rights.

Yes, I was shocked by that too, and there’s a whole other blog post on that topic percolating in my noggin as we speak. 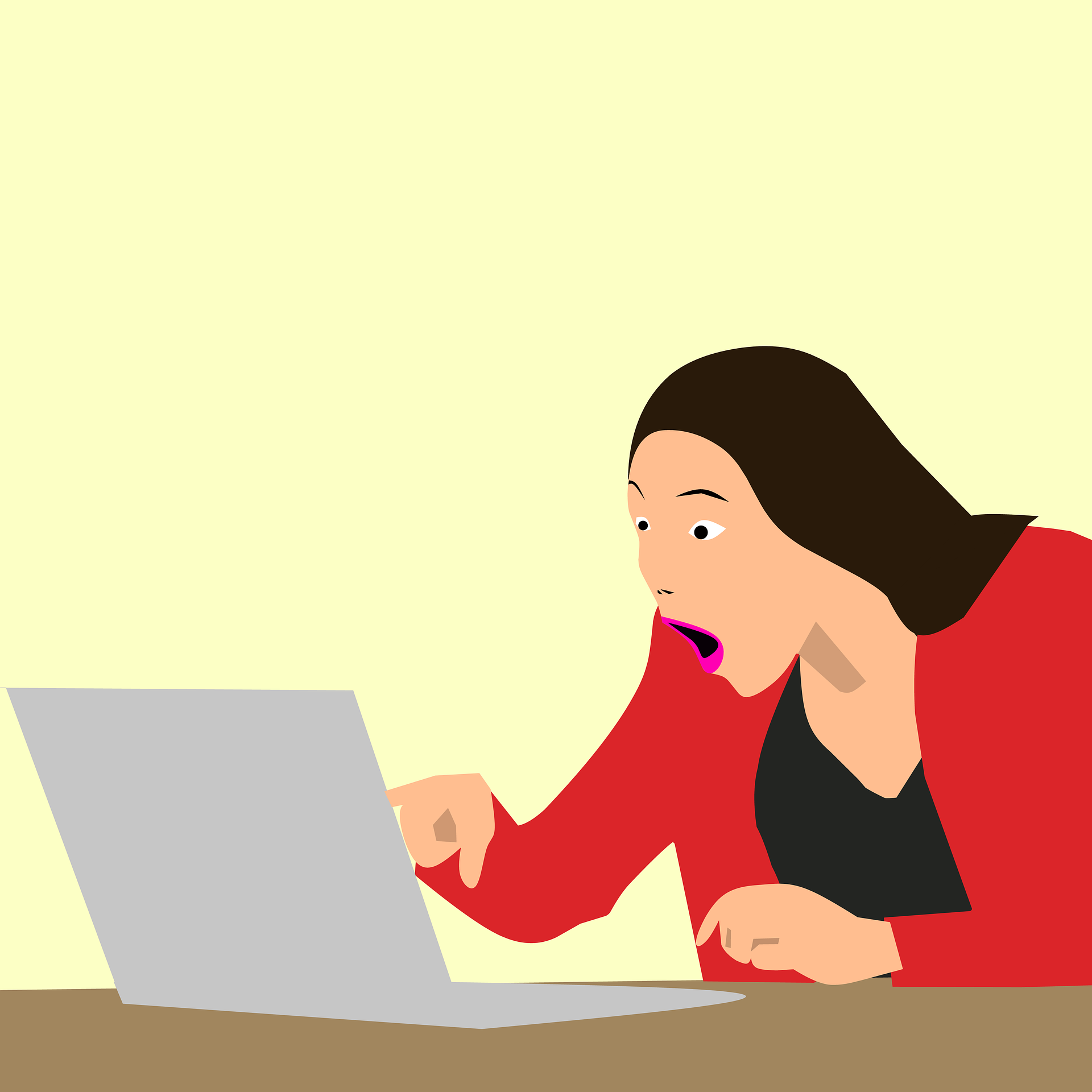 If a person’s next of kin really wanted to give someone a funeral that invalidates or ignores their LGBTQIA+ identity, there are sadly enough grey areas within the law to make that a very real possibility. This fills me with horror and sadness. Funeral professionals are legally obliged to carry out the instructions of the person who is paying for the funeral, as long as they act within the law. Much of what we do in the funeral profession is based on trust – who are we to question a recently bereaved client, and how would we know if they were only telling us one part of the life story of the person who has died? For trans people especially, not having your identity validated is a very real concern while we are living, as well as after we die. 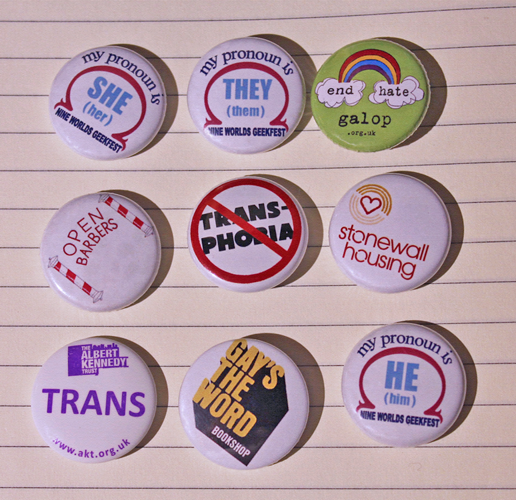 My hope is that by arming LGBTQIA+ people with the information they need, they can put plans in place to ensure their funeral wishes are honoured. Sometimes this can mean something as simple as writing out a Wishes Statement, but I would always advise if the situation is complex, seeking legal advice (you can find LGBTQIA+ lawyers through the link on the Stonewall website at the end of this post).

If we have information, we can make informed choices, and help others make decisions that are right for them. Funeral professionals, please be explicit about being LGBTQIA+ friendly so that people are more likely to be open and ask the questions they need to, and can say goodbye to the person who has died in a way that honours the way they lived their life without fear of discrimination.

If you have enjoyed this blog look out for the next blogs in the series or subscribe to Ceremony Matters emails so that we can let you know when a new blog goes up.

If you have enjoyed this blog, please submit a comment below.

To find LGBTQIA+ friendly services and community groups visit this page on the Stonewall website: https://www.stonewall.org.uk/help-advice/whats-my-area

For information and trans awareness training, visit the GIRES website:

For support for LGBTQIA+ people visit: 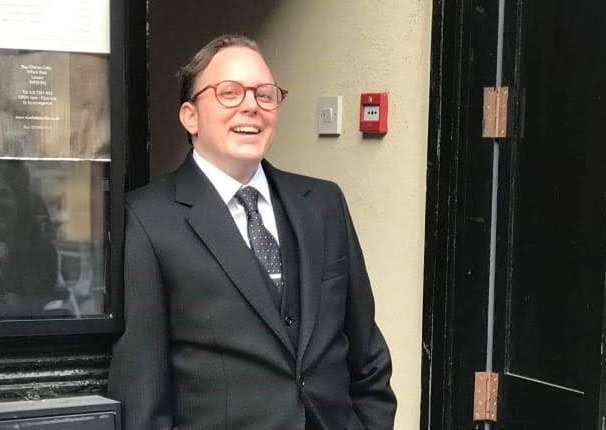 Ash Hayhurst is a relatively new kid on the block and has been a part-time Funeral Arranger in London since April 2019.Before joining the funeral profession, Ash volunteered with LGBT+ charities Stonewall Housing and Educate & Celebrate helping to develop workshops and resources for young people. He has a degree in Popular Music Composition and is a qualified secondary school music teacher. Ash is a bisexual transgender man, and his pronouns are he/him. 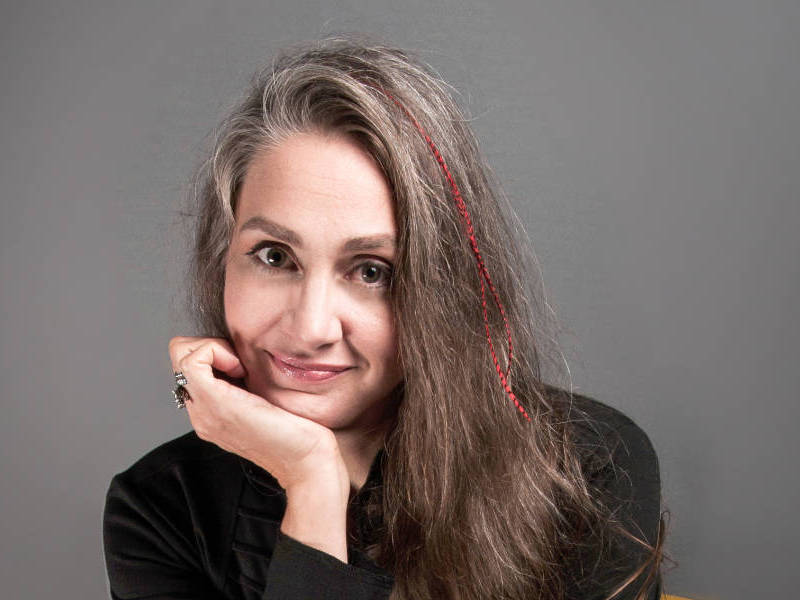 Emma Curtis is an award-winning secular minister, opera singer and grief and resilience counsellor, based in Surrey with a therapy practice in London’s West End. She is the founder of Ceremony Matters, offering advanced trainings, support and mentoring to funeral celebrants. Learn more about Emma here 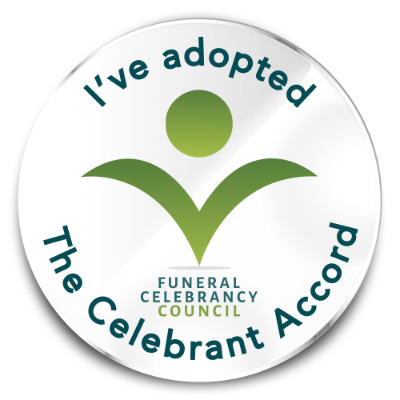 Ceremony Matters offers advanced trainings, continuing professional development, support and mentoring to funeral celebrants across the UK. Celebrant Support is a professional support service in person, online or over the phone.

Founder Emma Curtis is also available as a Secular Minister and Funeral Celebrant for ceremonies, and as a speaker.

Join our mailing list to receive the latest news and updates from us at Ceremony Matters including Celebrant Support.

We promise not to spam you or give away your information to anyone else.

You have Successfully Subscribed!

You can find out more about which cookies we are using or switch them off in settings.

This website uses cookies so that we can provide you with the best user experience possible. Cookie information is stored in your browser and performs functions such as recognising you when you return to our website and helping our team to understand which sections of the website you find most interesting and useful.

Strictly Necessary Cookie should be enabled at all times so that we can save your preferences for cookie settings.

If you disable this cookie, we will not be able to save your preferences. This means that every time you visit this website you will need to enable or disable cookies again.